You enter 1L Orientation and you look for someone to sit next to, hoping to strike up a friendship. Do you pick the guy your age in a baseball cap or the one who is 20 years older than you?

I recently had the great pleasure of meeting, face-to-face, one of my former clients who is a recent graduate of a law school consistently ranked in the Top 10. His post-bar trip with his wife brought him to Southern California, and my husband and I took them to brunch.

I was ready to pepper him with questions about his law school experience, his future plans, his feelings about the law school he chose, and how he made friends. Why was I so curious in this case? Because he is closer to 50 than to 40, is married, and has four grown children. And he started a business and took it public, then went back to college, then went to law school. He’s about as “non-traditional” an applicant as you’ll find out there.

After hearing him talk about his classmates and how open he was with them – inviting them to his home for dinner with his wife, calming them down when they panicked, slowing them down when the rat race became the goal – I felt that everyone who got to know him probably had a better law school experience as a result.

It’s great to make friends your own age, but you may need a parent-figure in law school, one who understands the business world AND what it’s like to be in your shoes as a 1L, and whose priorities are in the right place. Besides, one of his sons is your age and pretty cute and accomplished, so it can’t hurt to get in good with the dad, right? 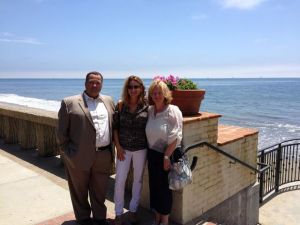