This weekend, I flew to Miami to attend the 20th reunion of my law school class. 20 years. I wanted to share with you some of my thoughts – how I would have approached law school differently, but even more so, thoughts about my classmates and how they are doing now.

I think this is especially important given that I went to a law school ranked (currently) 67th – hardly an elite school. Sometimes law school applicants focus solely on immediate hiring data for a graduating class (which is important, I grant you)  and ignore the bigger picture. A career is not about where you start – it’s about where you are in the midst of it, at its height. And, with most of us in our mid-to-late 40s, this is it. We are (or should be) at the height. Among the smattering of classmates present, we had an appellate judge, a managing partner for one of the most prestigious law firms in the country, BigLaw partners, solo practitioners, and of course one “Law School Expert.” 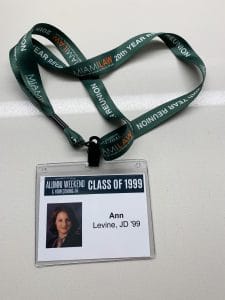 I attended law school in the evening program during my first year. I was working in advertising and wasn’t sure I wanted to commit to law school, but honestly, mostly, I was intimidated by the other students I knew from undergrad who would be attending Miami Law during the day and I wanted some separation. I’d heard the evening program was full of professional people who were collegial and had their own lives and priorities straight and that appealed to me.

And it was true. Members of our section included a retired army officer who commuted 75 miles each way to attend law school. There were paralegals (one of whom took me to the library and taught me to Shepardize – a super helpful friend to have!). Some worked as bailiffs, police officers, or investigators for the public defender’s office. There was the cute biker guy who booked Civil Procedure; I wasn’t really paying attention to what his day job was. . .

After the first semester, when we knew where we stood a bit better, I found a study partner from my section. We worked together through Torts, then Corporations. She worked for an energy company during the day, doing commercial leases, and it just kind of worked for us to study together. You find your tribe. But it was still law school. We had gunners, people who seemed to have all of the answers and then failed out of law school. The guy who played poker in the courtyard every day then made law review. The guy who laid out by the pool all weekend then asked to borrow my notes. The strident ones who were so sure they were right all the time. The woman who lorded superiority when she made the Moot Court Board and I didn’t.

You find your own way. I was one of the two Student Bar Association Senators representing the evening program and got involved in serving as a voice for the students who couldn’t be present for lunchtime speakers and club meetings but who very much wanted to feel involved in the community and wanted their voices heard. The SBA President was Reince Priebus.

After my first year, I moved into the full time program. I’d decided I really did love law school and wanted to commit to the full experience of it. Between SBA and law review (which I walked on to, and hated, but did because everyone said I had to), being yearbook editor (scholarship!), and chairing first year Orientation, I dove right in. I met a lot of people.  The following year, I ran for SBA President, and it was perhaps the thing I did before the age of 25 that led to the most personal growth. I had to put myself out there, go where students were, meet people, listen to people, and really hear them.

I didn’t win the election – of the 5 running I was the only woman, and I came in a close second in the race. But it didn’t matter – when I went back and visited the Associate Dean of Career Planning & Placement this weekend, she remembered it as though I’d won the election. I told her I liked her way better….

I stayed involved on campus. I wasn’t perfect. I didn’t always respect my peers. I focused too much on my class standing. When I was selected to be the student speaker at graduation, I hope I represented the feelings of my class and the wisdom we gained. Who knows?

Then I moved. I took a job at the University of Denver College of Law, then moved again to California to work at California Western School of Law – my first post as Director of Admissions. Over the years, even though I was on the opposite coast, I kept in touch with some people from law school as Facebook emerged and took over the world. I watched people begin careers as prosecutors, one person won a seat in Congress, and one became a lawyer for NASA.  People made names for themselves in Atlanta, Washington DC, and New York.

Later, when I moved to Santa Barbara and practiced law for a short time, I went to a BBQ sponsored by the local Bar Association. A judge was speaking to the hundred or so lawyers present. I looked across the patio, and there was my study buddy! We were 3,000 miles from Miami, and my study partner was also practicing law in Santa Barbara! Now, tell me how you can’t leave the state unless you attend a top-20 law school???

And now, 20 years have passed. At the reunion, I saw some faces I hadn’t even thought about in the 20 years since law school graduation. And we were happy to see each other! The annoying guy who drove me insane asking for notes while he went to the pool was still there being annoying and driving everyone else equally insane. The cute biker guy is still cute, but now wearing a suit and is a big deal business litigator. The retired army veteran is now a retired judge!

And people were nice to each other, welcoming, happy to be together and to catch up. Whatever some of us may have felt in terms of competing with our peers or proving ourselves in law school was replaced with a new vibe: one that was supportive, interested in each other, open, friendly, sincere.

What if we’d started law school that way? And by “we,” I mean “I.” What if I’d started law school open, friendly, un-self conscious, excited to be around an interesting, diverse, group of people? We were all there for different reasons, our careers went in different directions; the race for law review, and who booked what class, and who won what position didn’t end up mattering in the end. At all.

So, the takeaway here, I think, is that (1) law school is what you make of it; (2) the people are the thing; (3) there are more benefits to being open with your peers than competitive with them; (4) remember that you’re all in this together, not just for three years, but for your career. Therefore, invest in the people around you. Create community rather than competition. Your career will be better for it.