A client texted me last night after LSAT scores came out. He received an LSAT score of 160, which was significantly lower than his practice tests (169-172). It was only his second time taking the test, yet he said he was ready to move forward and apply.

Here’s a screenshot of what I told him: 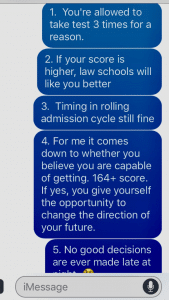 It’s worth waiting 6 weeks to be more competitive for both the schools you’re interested in as well as scholarships you might qualify for. Why compromise? If you apply now, with the 160, you’ll never be happy with your results. You’ll feel you left an opportunity on the table. Why? Because some anonymous fellow applicants on a forum said so?

Give yourself the best possible chance to succeed.