A 4-Week Calendar for December LSAT Takers, Plus a Bonus Tip! 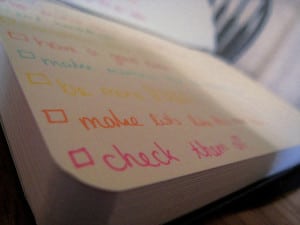 It’s mid-December, and you’ve had a week to get over the post-LSAT slump and any anxiety you might have had about canceling or keeping your LSAT score. If you’re in college, your final exams have been winding down–and if you’re a working professional, the holiday parties and lax hours have begun–so it’s time to start using your time wisely in order to submit your law school applications in mid-January.

I’ve written a full timeline for the 9 steps to take over on Above The Law. Here are the basics, plus a 10th item that’s a little surprising, even to me.

1: Register for the Credential Assembly Service and send your transcripts to LSAC. This could take a while, so get it started first.

2: Get letters of recommendation on the way. The LSAC does accept the letters electronically and posts them relatively quickly, but those writing the letters may need a bit of prodding.

3: Clean up your resume. Make sure formatting is consistent, it’s free of errors, and it puts your life since high school in the best light.

4: Work on your personal statement. No avoiding it – get to work!

5: Explain weaknesses. Don’t spend time wondering IF you should write up possible character and fitness items. Just write them up.

6: Decide about diversity. If you won’t be repeating your personal statement, and you have a solid diversity topic, then write it. My general rule of thumb is “if it feels like a reach, it’s a reach” and you shouldn’t write it.

7: Address your LSAT when the scores come out on January 5, you will be ready to pick schools and decide if an addendum is necessary.

9: Submit applications after ensuring that the PDF versions are easy to read and correctly punctuated.

Why the February LSAT Might Be Good Idea (for a change!)

In addition to the 9 steps I outlined in my Above The Law post, I want to share a 10th that might surprise you: Think about the February LSAT. Since starting Law School Expert more than a decade ago, I have never before advised taking the February LSAT for admission during the same cycle but this year I’m changing my mind.

It’s still not ideal to count on a February LSAT score because:
1: Law schools will have waiting lists at that point, and
2: It’s hard to be competitive at a reach school at the end of the cycle, and
3: A lot of scholarship offers will have already been made, but – on the other hand – law school has become, increasingly, a buyer’s market, and many law schools are now so eager for qualified applicants that they are extending their admission cycles.

One law school told me directly that they really do want February applicants, and not just to add people to the rejection pile and keep their admission rates low, but actually to fill the class with qualified applicants.

That being said, only take the February LSAT if you’re sure you will increase your score – and with only about a month between the December score release and the February test, it’s not a great time to learn more in order to perform better. However, if you under-performed on December’s exam and all that logical reasoning is still haunting your dreams, then taking it again in February might work in your favor.

4 thoughts on “A 4-Week Calendar for December LSAT Takers, Plus a Bonus Tip!”