“A Waitlist Is A Second Admission Cycle”

Wednesday night, I sat on a law school admissions panel at the ManhattanLSAT Pre-Law Networking Event at UCLA. It’s always fun for me to interact with prospective law applicants in person, but this event was special in a few ways. I got to meet one of my current law school admission consulting clients, which I always enjoy, and I got to reunite with my closest friend from law school, Don West Jr., who was on the Sports and Entertainment Law Panel. 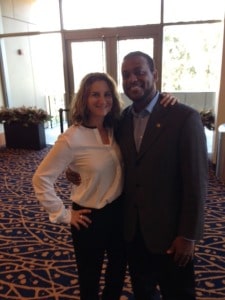 – We talked about the impact of the downturn in law school applications. Class sizes are shrinking only marginally, and the median LSAT and GPA numbers for admission are not dropping dramatically. However, law school applicants are more savvy. The law school admission directors stated that the quality of applications is improving, applicants are being smarter about how they present themselves (she gave a nod to me here….) and they are devoting more time to studying for the LSAT. This is your competition for law school admission! These people are savvy and taking advantage of the resources available to them. Let this inspire those of you applying to law school this coming cycle to take this process seriously. I added that law school applicants were benefitting from the downturn in several ways, including additional availability of scholarships and often having the opportunity to interview with schools – something that wasn’t available when application numbers were at an all-time high when I started Law School Expert ten years ago.

– Waitlists are not denials: they are opportunities! “We use our waitlist as a second admission cycle.” This came from the Director of Admissions at UCLA, who shared that a third (A THIRD!) of their incoming class this past year came in off the waitlist. And, even better, she affirmed what I’ve been telling you all along: launching your campaign to get in does pay off. She wants you to keep in touch with her about your interest, and the other scholarship offers you’ve received that you would give up to attend UCLA, etc. She doesn’t want to be stalked, but she wants to know you’re a sure thing when she’s looking to fill a spot in the class. (And she agreed with me that a waitlist campaign is a marathon and not a sprint – you may need to be willing to hang in there until that spot opens up, even if it’s on the first day of Orientation at another law school).

– A non-traditional applicant who returned to school after raising her family was worried that her age would be held against her, despite her stellar grades in college.  And, she was worried that she would be at a disadvantage because she couldn’t join clubs in school since she still had kids at home. She received enthusiastic encouragement from all of the admission panelists. The representative from Southwestern Law School shared that they have a 19 year old in this year’s entering class, alongside a 61 year old. I shared that I had clients in their late 40’s who attended to Harvard Law School, Michigan Law School and many others. I hope this applicant left feeling excited about her prospects.

I want to thank ManhattanLSAT for putting together a great event. Their next event is Tuesday in New York and you can RSVP here. Law School Expert will be represented (but not by me, unfortunately….).

One of the night’s best moments for me came when we were asked about the role of LSAT and GPA in the law school application. There was the normal response by the other two panelists. “We view applicants holistically, blah, blah….” I chimed in and said there were limits to this, and UCLA isn’t going to take someone with an LSAT score in the 130s because they view the application “holistically.” When she chimed in and said, “Last year we took someone with an LSAT score under 150!” I tried really hard not to smirk – it was one of my clients ;).